SciVal enables universities to measure their research performance and make informed strategic decisions. My UX team developed SciVal from the ground up. Our focus on user needs and ease of use was a primary reason for SciVal's commercial success.

Using cloud-based big data, SciVal analyzes the worldwide scientific publication output to give insight into the research performance of some 5,000 different institutions and 220 different countries, as well as individual researchers and research teams.

Universities using SciVal to evaluate and improve their research performance said that they love its flexibility and ease of use. The UX design was a key differentiator from competitor products.


I designed SciVal (in partnership with other UX specialists) from the ground up using user-centered design methodologies such as user research, personas and information architecture. I was responsible for designing and overseeing the implementation of many of the key features of SciVal, such as the Overview and Collaboration modules.

As UX team lead for SciVal, I headed a team of three UX specialists. I created a high-fidelity interactive prototype of the site using Axure, delivered UI specs to the Agile development team, and conducted UI reviews and usability testing to ensure that the UI is of the highest quality. I also led on content and messaging, consistency in UI and terminology, and Web accessibility. 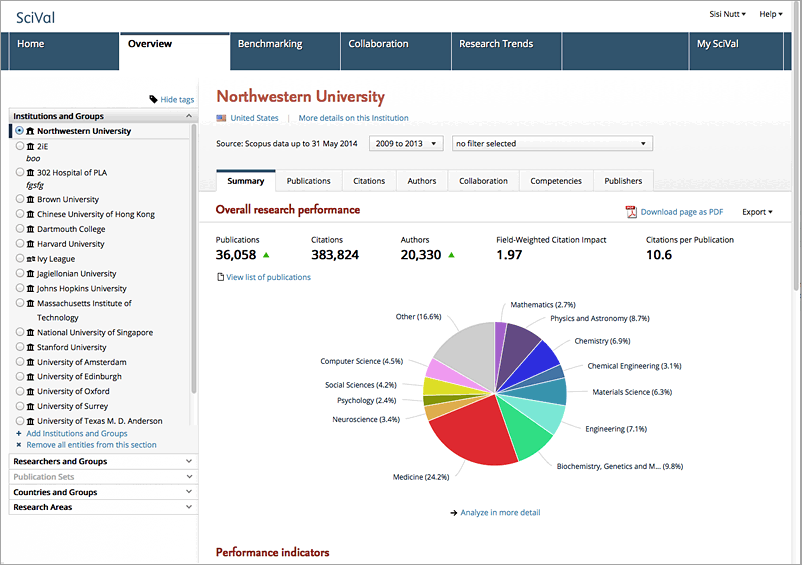 In 2014 I led a redesign of the SciVal's primary module to give it a dashboard-style design, with the aim of removing duplicate information and simplifying the interface. The underlying business reasons were to make SciVal more accessible to a broader audience, in particular to reach the eyeballs of higher-ups within the university administration.

The primary focus of my analysis was to determine what information to show on the dashboard.

I first did an analysis of usage statistics collected with Google Analytics. This revealed which research performance indicators in SciVal were being used most. It also showed that there were regional differences (between Europe, Asia and North America for instance) but these were relatively minor. Thirdly, the usage statistics showed that few users progressed from the first page to the subsequent detail pages.

Based on this analysis I created mockups and conducted a survey of internal users. I updated the mockups based on this feedback and followed up with some in-person interviews with SciVal users. The survey and interviews largely confirmed the findings from the usage statistics and also enabled me to more clearly define the user needs for a dashboard page.

The qualitative research also clarified the primary users of the dashboard: novice SciVal users and users such as senior university administrators who need to evaluate research performance, but do not have in-depth knowledge of the metrics that can be used for this. Research also confirmed that users would like to download the dashboard as a PDF so it can be shared with colleagues or included in reports or presentations.

I created a high-fidelity interactive prototype for the new dashboard using Axure, and produced Agile stories with UI specs and screenshots of the prototype. I then supported the implementation by the development team of both the new dashboard page and the PDF version.

The new dashboard was released in October 2014 to positive feedback from users and business stakeholders. 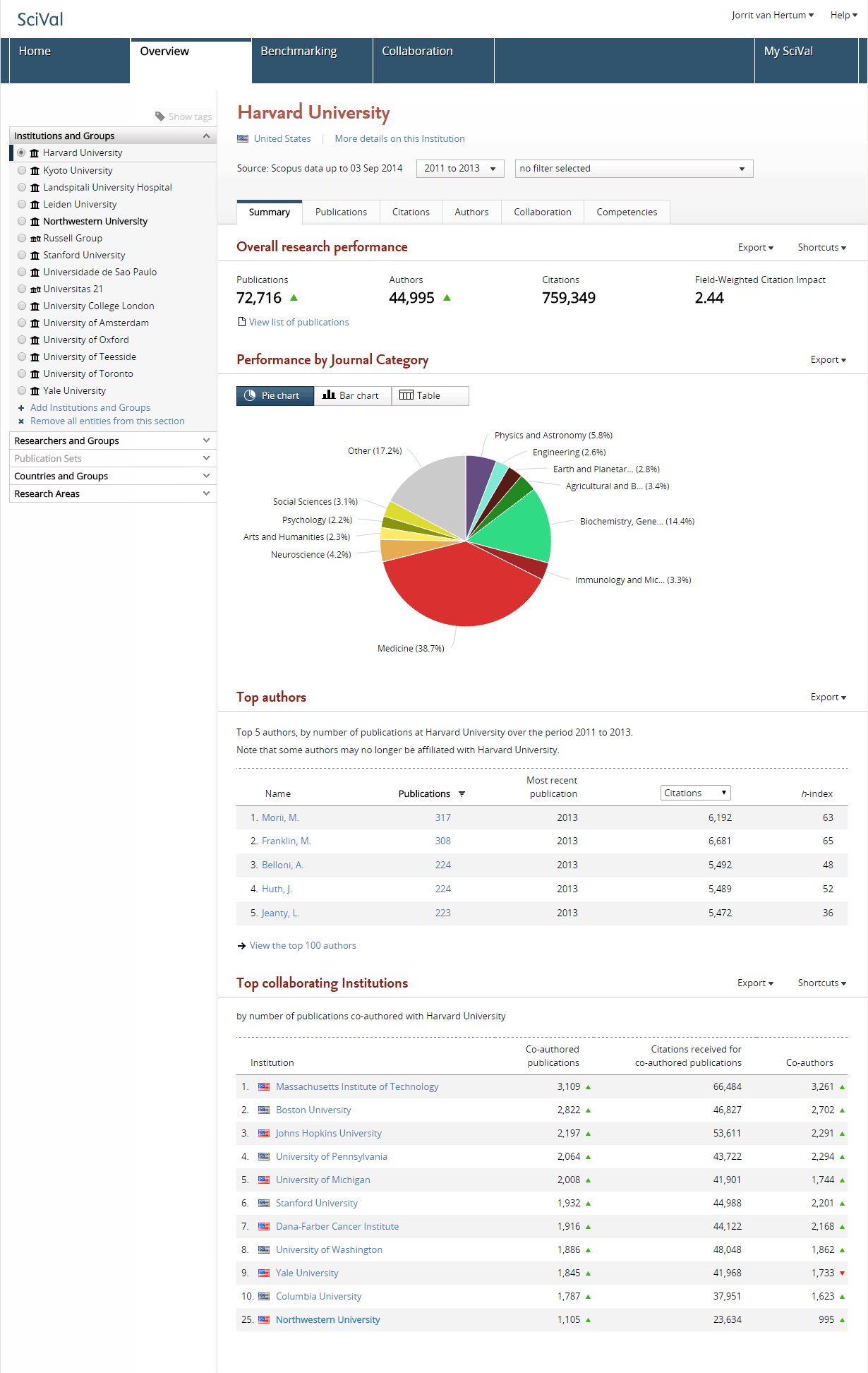 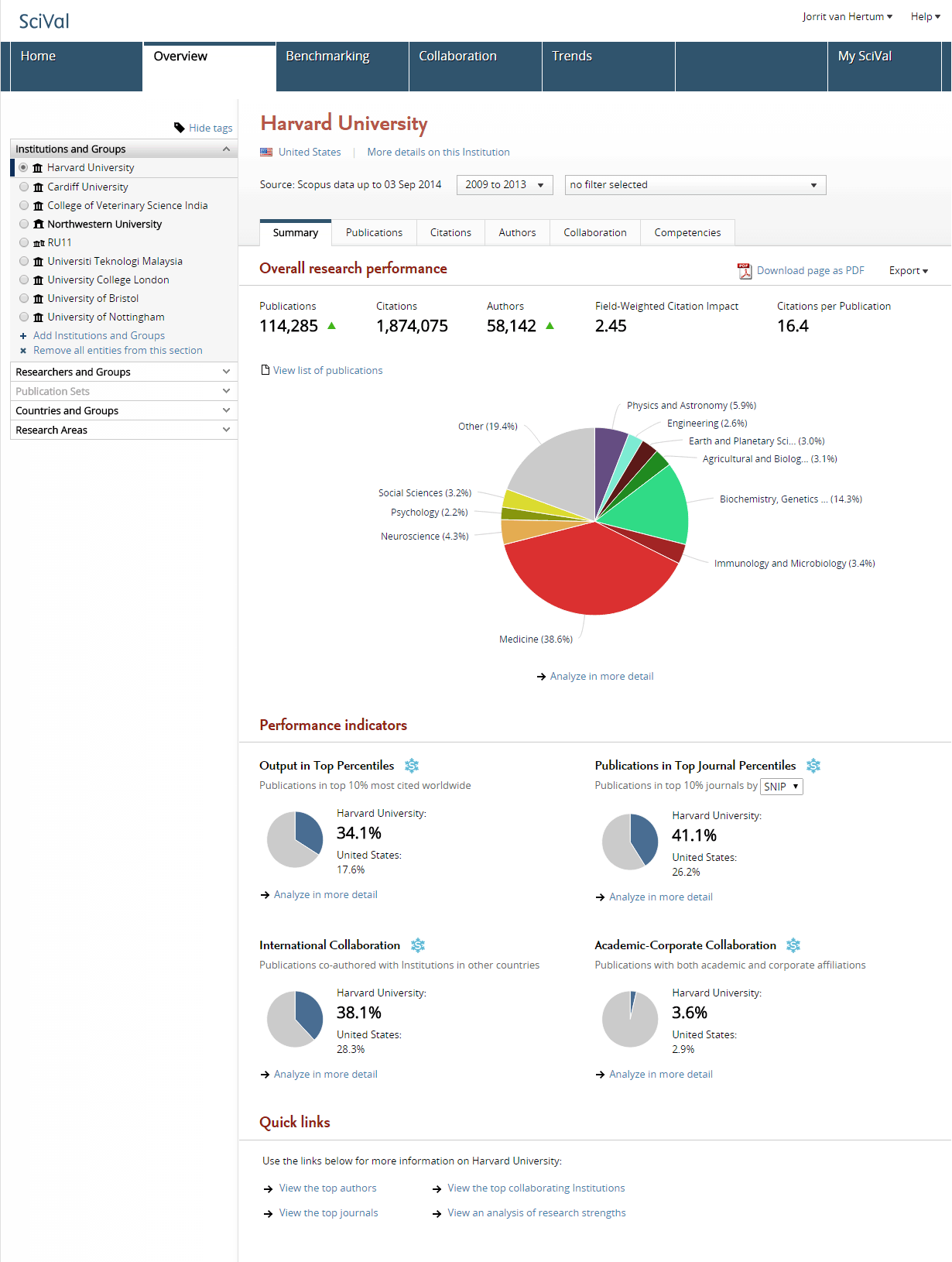